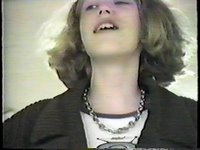 Sarah's 19th Birthday. . .
. . . was a little tough for me/us. John was out of town, but I know that he was thinking about her. Matt and I talked about her. I talked to others about her, and received more than 1 email from people who were praying for her/us.
I had placed a special birthday ad in the paper for her ~ hope she saw it, or one of her 'friends' told her about it.
I created and placed a couple of birthday flyers on the bulletin board at Wal-Mart. This one was a little different from the last couple that I had made. It was more colorful.
Guess we will get by, but only through God's strength will we make it through such tough times.
Neh8:10 - The joy of the Lord is (my) strength.
Posted by Louise at 5:37 PM No comments:

Well, May 1, 2005 was the 4th - yes I said the 4th missing date of Sarah. It was a difficult time. Seems like last year wasn't as bad for me as this year. Don't know why, though. Guess I'm just missing her really badly right now. I couldn't post anything new last month because of horrible depression about it. It would all have been a complete downer, so avoided doing it.
June 14 will be Sarah's 19th birthday. I hope it's a wonderful day for her. We will miss her, but possibly make her favorite birthday cake anyway. Maybe she'll think about us, too and call home.
Got an interesting call last week. The Montel Show aired us a second time already!!! at the re-run time. We didn't know it was going to air again, but think the exposure is really great and I am very thankful that they aired it again so soon. Back to the call: some people in a different town had seen the show, the husband, who is a fireman, had picked up a girl about a week earlier that had 5 bags she was carrying down the road. He saw the show, quite by accident, and really thought that the girl was our Sarah. She told him her name is Sarah (common name, really) and she wasn't really talkative about family, etc. His wife called me (which was a good thing) and I went to the town. Had to wait awhile until Sarah got back from where she had been, so that I could see her myself. These people that were waiting with me (the ones that had called) really wanted it to be my Sarah. There was a slight resemblance, but it was definitely a different Sarah. The first two things I noticed about her is that her teeth are really straight, and her nose is different. Remember, I haven't seen our precious 3rd daughter in MORE Than 4 years so I looked for things that I distinctly know about Sarah that are unique to her. As a matter of fact, the people so wanted it to be our Sarah, that they asked me a couple of times if I was sure that it wasn't her. Yes, I was very sure. :((
That's life, isn't it. But, I still believe that the girl who took the time to look up our phone number and call me, had done the right thing. What if it had been our Sarah and she hadn't called??? Well, she would have always wondered about it, and her conscience wouldn't be clear. Her conscience is clear because she did the right thing. I don't fault her for that, at all. I would rather check out a false lead than not. Members of her family and her friends - people who knew her well - would be the ones to be able to identify her for sure.
Speaking of her friends: John saw one of Sarah's friends a few days ago at the local Wal-Mart and had some words about certain people who know what happened to Sarah but wouldn't tell us anything. It wasn't a pleasant conversation. Now her flyers are coming down (again) from the Wal-Mart bulletin board where I commonly keep them. Hmmm - wonder who could be doing that?!
So, good-bye for today - er - this morning, and I'll add more another time.
BTW, please keep us in your prayers, as her birthday approaches quickly.
Blessings today and always ~ Neh. 8:10 ~ Louise
Posted by Louise at 1:12 AM 1 comment: